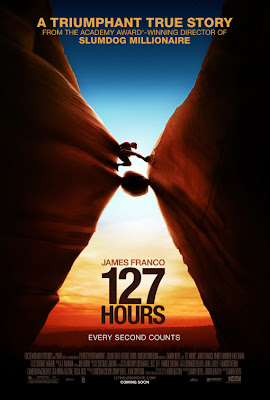 Aron Ralston: This rock has been waiting for me my whole life.
I thought that winning an Oscar might mellowSLUMDOG MILLIONAIREdirector, Danny Boyle, but it only seems to have fueled his fire. Before anything has a chance to happen in his latest,127 HOURS, the screen is split into three and images of people going to work or running marathons are inundating the screen at rapid speeds. I understand that he has his own style but I want to see Boyle just let the action unfold for a change, instead of just chopping it up and rearranging it visually to simply make it look cooler. At times in Boyle’s career, it has felt like the images needed the overt style to become relevant or meaningful but this time is different. Boyle has finally found a story that begs for his personal yet simultaneously impersonal touch. 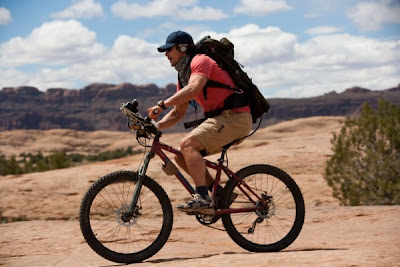 127 HOURSis the story of an adrenaline junkie, a nature nut, a loner. Forcing an image to wake the heck up and jump off the screen itself is akin to what protagonist Aron Ralston (James Franco) does whenever he can. And when he can’t make that happen, he would almost rather be alone. He seeks out thrills to elevate himself above the mundane just like Boyle tries to enhance his image. When Ralston gets away from the city though and into the peaks and valleys of Blue John Canyon, Boyle slows his pace and allows the sheer grandness and beauty of the landscape to speak for itself. And speak it does. It asserts itself and its immovable brilliance by reminding man just who’s in charge here after all when it almost swallows young Ralston whole. 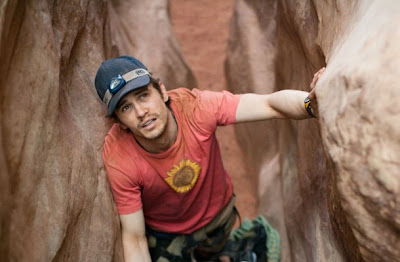 Ralston is a real person and in 2003, he spent a sum total of, you guessed it, 127 hours literally stuck between a rock and hard place when a rock fell with him into a cavernous gap and crushed his arm against the wall. Franco’s journey as Ralston is rarely easy to bear and sometimes just as difficult for us to take as well. His spirit goes from exuberant to painfully sober to near delirium and he carries it off with a strength I’m not the least bit surprised to see. Boyle was sure to lighten the tension with flashbacks that inform us of exactly everything Ralston still has to live for, which in turn teaches him a thing or two about how to actually live for it. The point may be somewhat plain but the experience that is 127 HOURS is a testament to an amazing feat of human endurance and perseverance, as well as an adventure that won’t soon be forgotten.