For many of us, we just walk right past them. They fill the cracks of our peripherals as we hurry down busy city streets and, like a great deal of the world’s unexpected beauty, these too go unnoticed. For others though, those who are actively seeking them out instead of merely remaining ignorant to their presence, these sometimes rare beauties provide insight on top of valuable information. They come in different sizes; they come is different colours; they come with varying degrees of meaning and commentary. Maybe they lined our walls when we were younger; maybe they now line the walls of the abandoned building down your street. They are rock posters and while they may not be roses waiting for someone to take the time to smell them, you should stop to see how far they’ve come the next time you catch them in the corner of your eye.

First time filmmaker, Eileen Yaghoobian, has decided it is time for the underground rock poster culture to get out of the basement and have their day in the sun with her first documentary, DIED YOUNG STAYED PRETTY. Both pretty and young (though she would not say just how young), Yaghoobian, who is Iranian born and Canadian raised, is boisterously alive and her enthusiasm for the counter culture poster community and the film she made on the subject is infectious. Now, I know what you’re thinking. A whole movie about posters? How can that be even remotely interesting? I thought the same thing when I found out I had to watch it. The truth of it is that it isn’t remotely interesting; it is actually downright fascinating and provocative. Yaghoobian has, over the last four years, crafted a refreshing take on the documentary that is just as much about the people behind the posters as the progression of the culture itself. The result is an engrossing exploration of influence, rebellion and the human condition that perfectly mirrors the language of the subject it presents.

DIED YOUNG STAYED PRETTY, which gets its title from both a source of inspiration and a source of healing, is just now beginning its journey along the festival circuit, starting with a world premiere at the Montreal World Film Festival. Yaghoobian is overwhelmed by the response, aware of her hurdles and hopeful for the film’s future. She is also more than happy to talk about it. 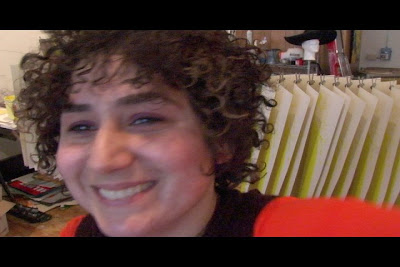 Joseph Belanger: Congratulations on your stunning debut. My first curiosity is how you ever thought to go underground and tackle this marginalized culture.
Eileen Yaghoobian: Thank you. A designer friend, Michael Humphries, had sent me a link to Gig Posters. I saw the posters and related to them because my second brother had just died and I was in this very dark place.

JB: I’m very sorry.
EY: Yes, both my brothers died young. I was in this dark place, dark apartment, and when I saw the imagery, like teddy bears with their arms cut off and this twisted stuff that they were using, I found it dark but funny. At the time I was relating to the imagery that was representing the bands and of course I loved the music. I always wanted to make a feature film so I just went for it; I didn’t wait for financing. I made this with my pocket money and I just did it.

JB: Either you have very deep pockets or this must have been a creatively affordable shoot.
EY: Budget is huge and I come from a very photographic background so it was key for me that it look a certain way. When I first started, I actually had a small crew, a director of photography and a boom guy. This was only for four days though. I shot listed and actually had a thirty page script based on this convention that I was going to in Seattle. I went to Georgia, Florida, North Carolina, Kentucky, Texas, Calgary, Montreal. Three years of location filming, sometimes sleeping on floors.

JB: I found also that the film style embodies the spirit of its subjects. It isn’t necessarily an activist film but it has a guerilla style that fits perfectly with what is being discussed on screen. Was this your plan all along?
EY: As far as the cutting goes, I was very specific about this. I wanted to cut it as though I were cut and pasting a poster. I cut like that on purpose so that it would give you that energy that the world has. Rock has that energy. I did shoot with long shots so a lot of the shots we see are good as one take. So when I first cut the film it was like five hours long or something insane like that. But I didn’t want it to have that traditional documentary form though because I had to be true to the subject. I didn’t follow any specific structure but I just felt I had to be true to the construction of a poster and the rock world. 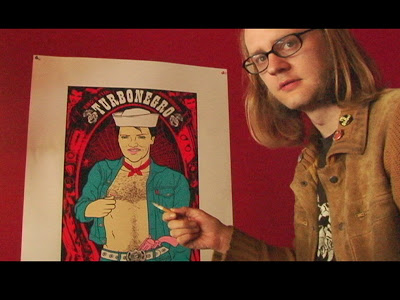 JB: Oddly enough, in terms of the subject, there isn’t a great deal of time in the film spent on the formal process of poster making. We see posters being made in the background but it is more about the inspiration rather than the mechanics.
EY: The process is in their worlds, in their studios, in their space. That’s just location filming really. You see it in the background; you see it in their conversation. It is there in the beginning of the film. You get it all in one chunk, from the mixing of the ink to the finished poster, as there is a conversation about the golden era of poster making – how it used to be this trite crap when it was heavy metal stuff but how the simplicity and the design were changed with punk. The imagery matched the music and that is a historical point for these guys.

JB: And these guys definitely share in a community as well. You get the impression that they’re very reclusive, almost to the point where I don’t expect some of them to leave their apartments. Still, they have found each and know each other.
EY: Mark Greenberg, the film’s composer, said to me when he first saw the cut, “Out of these dirty, murky places comes this shining art and community.” GigPosters.com is really the site that made that happen. Before the site, they were still obviously making these posters but no one knew who else existed. Then, in 2001, when Gig Posters began archiving all these posters, that’s when they began their community. Some of these posters are for unknown bands; some are just for local venues. Maybe 100 people would see the poster. Now there is a place to see the posters and there are even celebrities within their own ranks. It’s like their in a renaissance and I was there to capture it.

JB: And big brother is there to capitalize on it. There seems to be this fine line between artistic value and commerce common to all your subjects. They are creating from a counter culture place but they still have to eat. How do they manage?
EY: Some of them have 12 dollars in their bank account. Most of their money comes from after sales at gigs. Some of them are what they are. They don’t make much money and they live what they make. They are the poster boy, essentially. Some of them are professional designers and make the posters for no money just because they love it. This is what is really amazing about this scene. Despite the obvious corporate hold on the music, these people are still fans. They’re making posters in this archaic, primitive way because they’re fans of the music. It’s kind of lovely, right? 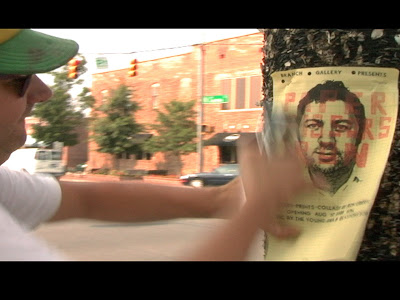 JB: Yes, it most certainly is and that is just one of the many unexpected messages to come out of DIED YOUNG STAYED PRETTY. They are all such different kinds of people too. They come from so many backgrounds and walks of life but find this commonality between them in the underground. After all of this, do you think of yourself now as an underground artist?
EY: What is that? One of the poster makers in the film, Brian Chippendale says, “The underground is waiting for the overground.” Maybe I’m underground because I’m waiting to make some fucking money. I’m not financing my next one out of my own pocket. This was totally DIY. No one knows who the hell I am. That’s underground.

Yaghoobian’s next project will be a narrative. Ordinarily, this would be a definite bid for a broad appeal but this one is a gothic love story so she might be playing to the underground for just a little longer than expected. Meanwhile, DIED YOUNG STAYED PRETTY is fresh off a spot at the Atlantic Film Festival for its return to Montreal as part of Pop Montreal on October 3.