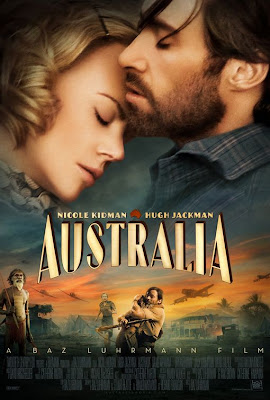 Australia, the land down under. A land grand in size and rich in scenery. A land where kangaroos jump spryly alongside cars and aboriginal children go on walkabout without warning. Yes, this is Australia or at the very least, this is the clichéd representation of the country as per Baz Luhrmann’s AUSTRALIA, a film that is part epic romance and part homage to the country he calls home. Luhrmann shot to fame in the early 90’s with his first feature, STRICTLY BALLROOM, a film that took place down under and for a tiny fraction of what AUSTRALIA cost, was a more genuine insight into the people who reside there. Nearly twenty years later, his magic seems to have turned into madness as I can think of no other justification for Luhrmann reducing his home and its history into stereotypical schlock ready to serve to unintentionally naïve American audiences. 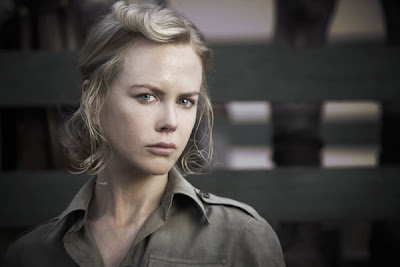 AUSTRALIA takes place in 1939, just before the Japanese attacked the country during the Second World War. Lady Sarah Ashley (Nicole Kidman, whose performance is uneven but still engaging), is a British aristocrat who has traveled far from home to find her husband and bring him back. Her husband’s business in Australia got the best of him though and he has passed away. It is now up to this displaced diva to finish the job. She must put aside her dainty nature to rough it in the outback, herding cattle with a group of misfits, in order to take down corruption and monopolistic authorities running the cattle show. Throw in a steamy romance between Ashley and her main cattle handler (Hugh Jackman, easily earning his recent “Sexiest Man Alive” title), and you got yourself a movie. Well, you would have yourself a regular sized movie but this is Luhrmann’s opus, one which he seems conscious of the entire time. To fill the 2 hour and 45 minute run time, Luhrmann definitely throws in the romance but also adds racial issues, family drama, gender prejudice and a great war. It is boiling over with potential but missing the great deal of passion necessary to sustain itself. 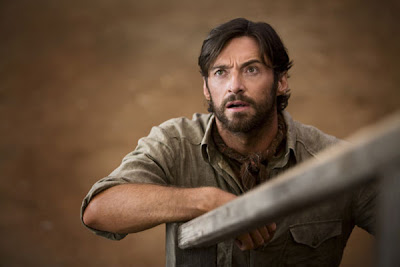 After completing his Red Curtain Trilogy (including his first feature as well as WILLIAM SHAKESPEARE’S ROMEO + JULIET and MOULIN ROUGE!), Luhrmann wanted to tackle historical accounts in his next films. The first was to be a biography of Alexander the Great but Oliver Stone beat him to that a few years back. Luhrmann then turned to his origins for inspiration instead and AUSTRALIA was born. The Red Curtain Trilogy was defined by style and theme. While Luhrmann hasn’t abandoned his dedication to love in AUSTRALIA, Luhrmann did set aside the signature schizophrenic style that made distinct lovers and haters of all who watched his works. Baz Luhrmann without everything that made him who he was is almost unrecognizable or unidentifiable even. You can almost feel him fighting with himself to tone down the extremities of the scenarios or slowing the speed of the story. The camera will move quickly all of a sudden but is reeled back in just as quickly. AUSTRALIA becomes a lesson in shame, one that I never expected from a man who so vehemently campaigned for truth and self in the past. By trying to be something he isn’t, Luhrmann only succeeded in losing his voice. 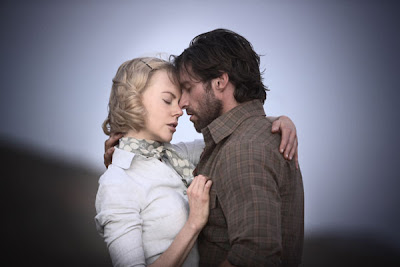 AUSTRALIA is a solid effort, sturdy on its feet but a slow and steady stride instead of the adventure it so clearly wants to be. It can be touching; it can be somewhat moving even; but it feels mostly as vague and meandering as the outback is vast. It is too theatrical and forced to be firmly historical and too unsure of itself to be genuinely effective. It is the most misguided mediocrity I’ve even seen go on for nearly three hours. I felt very little, learned even less; It was like being on an adventure where barely anything seemed to happen but you still appreciate the potential afforded by being there.. I just wish that the Baz I grew to know and love felt like he had come along for the ride because I feel like we didn’t spend any time together at all.