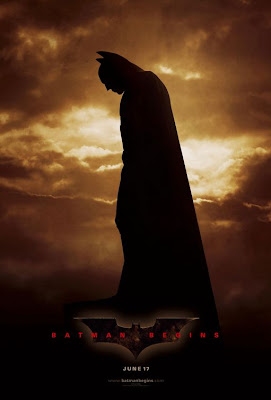 
Thomas Wayne: Why do we fall, Bruce? So we can learn to pick ourselves up.

From the terrifying opening shot of countless screeching bats flying across a burning red sky, it is unmistakably clear that Christopher Nolan’s BATMAN BEGINS will be nothing at all like the film incarnations that came before it. I describe it as terrifying because, like the man behind the mask of the titular character, I too am not a great fan of bats. I do however, enjoy movies about men who like to dress up in giant bat costumes quite a bit, and when I first saw Nolan’s reboot of a series that had been run deep into the ground by the previous hack of a helmer, I knew that this Batman would not only be invigorated for a new generation of fans but that it would likely go on to become the definitive incarnation of this iconic hero.

True to its title, Nolan, along with co-screenwriter, David S. Goyer (BLADE), provide the audience with a truly authentic and well-rounded origin story. What is perhaps most impressive about their take is how original it feels considering its been told so many times before. We are introduced to Bruce Wayne (Christian Bale) when he is still just a child. While playing, he falls into a cave and is attacked by a colony of bats. While this scene doesn’t pretend to show that this is where Batman was born, it does, at the very least, show us where his fascination with the winged creature came from. Cut from his first bat encounter to years later, as he takes his first steps toward becoming Batman, fighting, as Wayne in plain clothes, in a Bhutanese prison against a number of opponents, before embarking on an intensive ninja training that leads to his ability to appear invisible and his flare for the theatrical. These choices are so well rooted in believable reality that for the first time I can account for, Batman seems like someone who could actually exist. 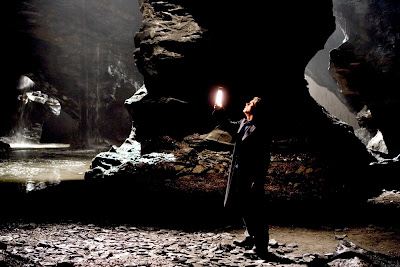 The main theme of BATMAN BEGINS is fear. Wayne is afraid of bats; he is afraid that ultimately he is responsible for his parents’ death; perhaps most significantly though, his fear has paralyzed him from participating in life since he was that small child. He learns, under the tutelage of Henri Ducard (Liam Neeson), not only how to face his fears but to have those same fears fuel his fury forward onto his enemies. Having found himself and a way to follow in his father’s footsteps by helping the good people of Gotham City (which is breathtaking in its glory days), Wayne grows up before our very eyes and Bale does a marvelous job at conveying this to his audience. We know he has a great spirit hidden far behind the self-imposed walls surrounding him; his supporters, and our superb supporting cast, from trusted butler and guardian, Alfred (Michael Caine) to childhood sweetheart and current Gotham City district attorney, Rachel Dawes (Katie Holmes), know what he can truly be if he lets it happen; the only person who still doesn’t see it is Wayne himself. 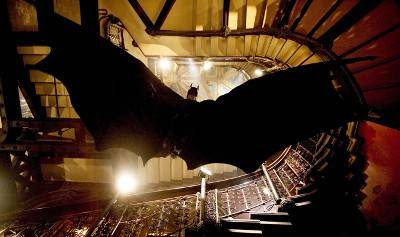 Just like you and I, Batman too has bats in his cave that plague him. Instead of cleaning them out though, he learns how to harness their power for the good of the many. With BATMAN BEGINS, Nolan redefines what it means to make a comic book movie. Unlike some other superheroes, Batman is just man. He just happens to have extensive training, enough money to equip himself with plenty of gadgets to take down his detractors, and a chip on his shoulder large enough to keep him doing it for the rest of his life. Nolan knows that this chip is what bonds Batman to the masses though. His mission to do right by the people of Gotham makes him a hero, but his somewhat selfish motivation to right the wrong that was done to his parents right before his eyes, taints his supposedly altruistic nature and makes him human. Batman has always been conflicted but never before has it been communicated on film in such a relatable way. And, never before, has it been so damn good.