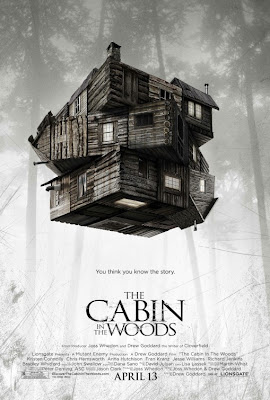 Not Your Typical Cabin
An interview with THE CABIN IN THE WOODS director, Drew Goddard

You might feel like you’ve seen this one before. A mixed bag of tight-bodies and quick witted teenagers make their way to a secluded cabin in the middle of nowhere, where naturally no one will ever hear their screams for help when they inevitably get sliced up into little bits. THE CABIN IN THE WOODS may look like this movie, and on some levels, it is, but on other levels, sometimes other worldly levels, it most certainly is not.

“We just love horror movies and this just stemmed from that love,” director and co-writer, Drew Goddard, tells me just a few hours before the Canadian premiere of his first feature. “We both just wanted to write a love letter to this genre.”

The “we” Goddard is referring to is himself and a man he refers to as his “partner in crime”, Joss Whedon. Goddard and Whedon first met on Whedon’s cult classic series, “Buffy and the Vampire Slayer”, and went on to work with him on the spin-off series, “Angel”, as well. “We just enjoy working together and we always talked after those shows went off the air about finding something else to do.”

Working with Whedon again was like old hat for Goddard. “We like to write fast. A lot of times when you don’t have a parachute, you leap into some very interesting places. So we locked ourselves in a hotel and didn’t leave until we had a script.” When I suggest that a cabin, say, in the woods might have been more apt, Goddard replies, “I feel like we didn’t need to do any method writing.”

What sets THE CABIN IN THE WOODS apart from the torture porn one would expect from the premise, is the action behind the scenes. These teens, led by Chris Hemsworth (Thor before he became Thor) and Kristen Connolly, are being chased and tormented but by whom and for what purpose? There is a genuine reason this is all happening, something that has been sorely lacking from the horror genre for some time now. “It felt like the studios were just recycling,” Goddard explains of his motivation. “And whenever the recycling starts to happen, that’s when you want to do something new. You can feel when there is no love behind them. When people making the film don’t care, it bleeds into the audience.”

And even when there is love propelling a project like this forward, it can still be tricky to set the tone just right. “First and foremost, we want to make a real movie. This is not a parody,” Goddard explains of the delicate balance between homage, horror and humour. Fortunately, Goddard was working with an expert. “That comes a lot from Joss’s aesthetic. The trick is to get to the truth of the characters.”

Regardless of who was at his side, Goddard can now also officially call himself a director, not just the guy who wrote a bunch of episodes of some of the most beloved television shows in history – from the aforementioned “Buffy” and “Angel” to his work with another famous geek, J.J. Abrams, including “Alias” and “Lost”. And while he loved directing, his next gig finds him returning to writing with the new Steven Spielberg project, ROBOPOCALYPSE. His reaction to discovering he would be working with Spielberg: “Am I dead? Is this a weird fever dream I’m having?”

First things first though, THE CABIN IN THE WOODS is finally hitting theatres after a few years on the shelf, thanks to MGM’s bankruptcy issues. And with all the buzz coming out of the film’s premiere at the SXSW festival earlier this year, I’d say it is well worth the wait. Goddard could simply not be happier. “Buzz like this is what you always hope for and yet you can’t force. You’ve gotta just make the best movie you can and hope for the best.”