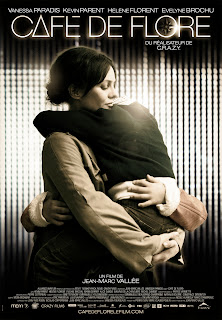 On September 1, 2011, at 11:00 A.M., Quebecois director, Jean-Marc Vallée, the man behind the Canadian classic, C.R.A.Z.Y., completed his latest film, CAFE DE FLORE. By 5:00 P.M. that same day, he was on a flight to Venice for the world premiere. “I don’t think I have the distance yet to talk well about it,” Vallée explains when we meet at the Toronto International Film Festival, the film’s second festival stop before it’s theatrical release. “In my humble experience, it usually takes a while before I know what words to use.”

To be fair, CAFE DE FLORE can be difficult to describe even after you’ve seen it a couple of times. There are two stories told simultaneously that take place far apart from each other in both time and space. In 1960’s Paris, Vanessa Paradis, looking dowdy and plain, plays a mother to a child with Down’s syndrome (Marin Gerrier) and in contemporary Montreal, a DJ (Kevin Parent, in a surprisingly solid acting debut) leaves his childhood sweetheart (Helene Florent) for another woman (Evelyne Brochu). “I wanted to make a love story but I wanted the film to have something else too,” Vallée attempts to explain. “I just wasn’t sure what that something else was. It’s not easy to describe but I think the ride is great.”

While I flat out refuse to divulge what exactly the connection is between these vastly different plots, I will say that a simple song connects them on screen and that song also served as the filmmaker’s inspiration for the entire film. The name of that song? Why, “Café de flore”, of course. When he first heard the Doctor Rockit song, Vallée thought, “It’s so epic. I’m going to make a film with this track.” And so the movie is built around this song as well as a general appreciation for music itself. This aspect of the film is the director’s most autobiographical. “Music makes me feel so good, makes me feel alive, makes me dream, makes me want to make movies,” Vallée asserts right before he starts humming the catchy accordion hook from the film’s title track to me.

Whether you can place your finger on it or not, there is no denying that Vallée’s CAFE DE FLORE most certainly has a pulse. All you need to do is sink into that beat and Vallée will be sure to move you.