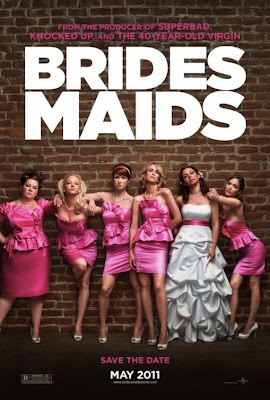 Megan: You’re your problem and you’re also your solution.
For years now, the boys have been yukking it up at the movies for our enjoyment and they have been doing it as crassly as humanly possible. These male bonding pictures have relegated the girls to the background as nagging wives, naïve love interests and/or sexual throwaway characters. Well, not anymore. In BRIDESMAIDS, Kristen Wiig and her gaggle of gal pals kick the buddy genre hard in the nuts to prove that anything the boys can do, they can do better, and more often than not, in more gross a fashion. Girls being girls though, they are sure to bring a little heart to the table too. 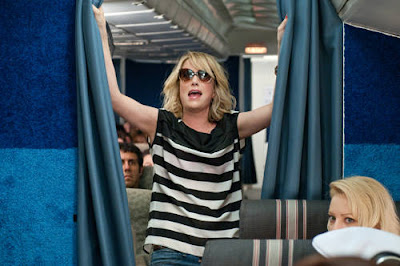 Wiig, a co-writer on the project, is Annie, a single girl who is not at the best juncture in her life. Her bakery business fell flat; she has to live with the most irksome roommates imaginable (Matt Lucas and Rebel Wilson); and she has seemingly lost all faith that her prince will one day come, accepting instead to fall into the bed of man with whom she clearly has no future (Jon Hamm). Now, while she can certainly do worst than Hamm as far as friends with benefits go, her declining stock hits a new low when her oldest friend, Lillian (Maya Rudolph, herself an old friend from Saturday Night Live), announces her engagement. Ordinarily this would be a joyous occasion but when you’re aging and single and your oldest partner in crime is leaving you to fend for yourself in the desolate desert that is dating, news like that takes on much grander implications. 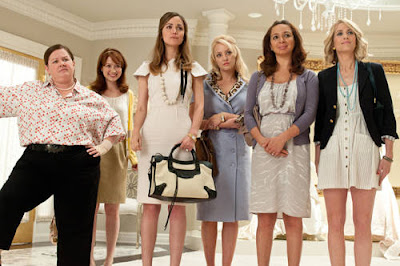 Annie proceeds to buckle and break down amidst the pressure of putting together the perfect bridal parties and the prospect of losing her best friend to the other side. Fortunately, Wiig negotiates a meltdown like no other and she does so in BRIDSEMAIDS with great care, allowing viewers to truly see how complex a person can get the longer they are subjected to the games single people play. Of course, she is also backed up by a hilarious ensemble, most notably Rose Byrne as a classic “frenemy” and Melissa McCarthy as a big girl who isn’t afraid to cry (or take a dump in a sink for that matter). And while I was mildly disappointed to see the film affirm that true happiness cannot be achieved on one’s own, I was too busy laughing hysterically to care.