Written and Directed by Sean Ellis 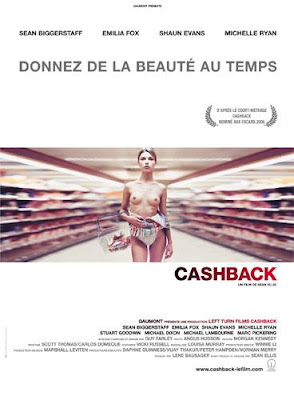 Ben: What is love anyway?
And is it really that fleeting?

It would be real easy for me to say that CASHBACK is so offensive, it will make you want to demand your precious cash back. Only that isn’t fair. Writer/Director Sean Ellis’s expansion of his 2004 Oscar nominated short film of the same name can be juvenile, unconvincing and entirely misogynistic, but it somehow manages to retain some level of tenderness and endearment that makes for a more often soothing than not experience. Having just broken up with his first serious girlfriend, Ben Willis (Sean Biggerstaff) loses the ability to sleep. He quickly grows tired of flicking the lights on and off repeatedly and reading all of the novels he always meant to, sometimes twice, to pass the time, and decides to get an overnight job at a grocery store a week into his new sleepless existence. (He is a speed-reader, apparently.) Here, he meets a group of quirky coworkers who provide a safe place for him to heal his wounds and let his imagination run wild in the cereal aisle. Somewhere between frozen foods and canned goods lies the secret to understanding love – how it begins, how it grows and how it spoils. If only there weren’t so many breasts to distract us.

Despite its earnest approach, CASHBACK’s quest to understand love needs a serious cleanup in aisle four. From the opening shot, the film’s slanted view of the male/female love experience is clear to all. In close-up and slow motion, a woman stares directly into the camera and goes into a psychotic rage. Her hair is flailing; her eyes beam with uncontrollable hatred. Not before long, she is throwing things. The shot introduces her as an irrational lunatic while the director frames this scenario as typical, supposedly relatable for any man. The film then cuts to Ben. He is docile, put upon and glassy-eyed. How could this be happening, he asks himself. He has such an innocent face. There could not possibly be any justification for this crazy woman’s fit. In this situation, she is the devil and he is the innocent. Ben’s narration is all we hear throughout this exchange, which leads me to wonder if maybe Ben is not more responsible for the love lost than Ellis appears to be suggesting. Yelling though she may be, Ben isn’t listening to a word she is saying. All progression begins with listening.

Ben does spend a lot of time listening to the sound of his own voice mind you. It keeps him isolated from his peers and keeps him from having any genuine human interactions. In fact, to pass the time while he works, Ben imagines that time has stopped and that he is the only one who can walk freely through it. What does this young artist do with this remarkable ability? Why he exposes the private parts of the female grocery store patrons by pulling up shirts and pulling down skirts of course. He proceeds to whip out his sketchpad and draw these half-naked beauties while reminiscing about his life’s experience with the opposite sex and the discovery of the female form. An encounter with a Swedish boarder when he was pre-adolescent exposed him to the wonders of the female anatomy and it seems he has not been able to see anything else since. But if he is capable of seeing artistic beauty in an open bag of peas on a grocery store floor, then how is it that everything that is beautiful about a woman is found only in her nakedness and never in her soul?

Somehow, Ben deriving art from his time-stopping, breast-exposing experience justifies what would ordinarily be seen as sexual assault. By telling this story, Ellis positions himself in a similar position on the fine line between art and objectification. While CASHBACK did get me to see love as life slowing down with someone else so that you can see all the beauty it has to offer together, it also made me feel uncomfortable. I was not at odds with myself and the physical act of watching so many nude bodies fill the screen. I was not even scandalized by the demeaning imagery. By now, I am accustomed to the male gaze. I was more so embarrassed to be watching a new filmmaker with such a romantic longing and vivid eye offer an art piece that does nothing more than expose an ego that thinks with the wrong head.