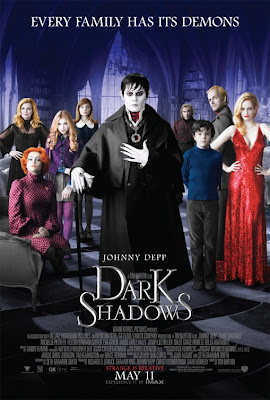 
Barnabas Collins: Of all the servants I could have spurned, I got the witch.

The original soap opera television series, DARK SHADOWS, is before my time, I’m afraid. I’ve never seen the show but from what I understand, it was a bizarre endeavor that, about six months into its roughly 5-year and 1225 episode run, introduced ghosts and other supernatural elements into its world, a first for daytime television for sure. About a year in, the show reached its height of popularity with the introduction of a vampire character by the name of Barnabas Collins. Boys everywhere wanted to be this debonair creature, who is both heroic and flawed. One of those boys was Johnny Depp.

Depp’s boyhood dream of being Barnabas has finally come true. These kind of dreams can do that when you have enough money and clout to resurrect a cult classic such as DARK SHADOWS by convincing Hollywood that you can sell it to the masses. And not surprisingly, Depp brought on his long time director buddy, Tim Burton, to helm the project, a seemingly natural choice. After all, Burton is the director of BEETLEJUICE and EDWARD SCISSORHANDS. If there is any director out there that can capture that kooky, yet sometimes scary, but still human deep down, tone needed to pull this film off, it’s this guy, right? Unfortunately, as of late, Burton is more often than not the director Hollywood goes to when you need a vividly colorful and imaginative film that plays so broad it loses all its actual character. DARK SHADOWS falls somewhere in between the two Burton’s. 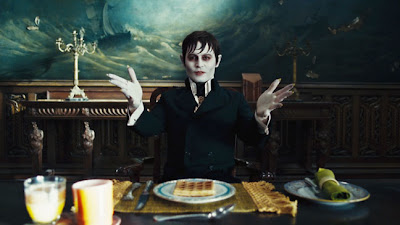 Burton does his best to keep these particular shadows pretty darn dark. Barnabas loses his parents at a young age, at the hand of a scorned lover, Angelique (Eva Green), and then watched his girlfriend plummet to her death off a cliff while under the influence of a magic spell (also administered by Angelique). When he reemerges in 1972, nearly 200 years after he was buried alive – well, more like buried undead – he rejoins his family, now led by a lovely Michelle Pfeiffer, and insists that they work together to reclaim the power and glory the Collins name once commanded. Any steam Burton musters in the setup though is lost once Barnabas is distracted by things like lava lamps and televisions. And then this epic, century-spanning, cursed feud is reduced to a corporate competition between fishing companies. Depp is delightful as Barnabas, which salvages DARK SHADOWS from disaster, but it would be nice to see Burton’s once unbound vision become boundless again, rather than see it consistently watered down for mass consumption. The worst part is that Burton is doing this all to himself.