DR. SEUSS’ HORTON HEARS A WHO! 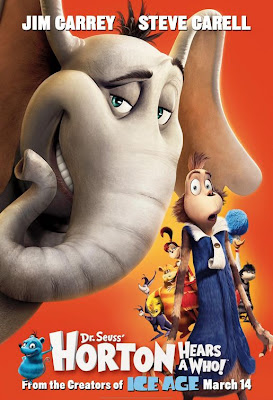 Katie: In my world, everyone’s a pony and eats rainbows and poops butterflies.

Dr. Seuss has not always found fortune when making his way from page to screen. But, this latest incarnation is the most who-larious I’ve ever seen. Get it? Who-larious? Like “hi-larious” but with “who”. As in all the Who’s down in Whoville and little Cindy Lou Who? Fine, roll your eyes but you’d be rhyming too if you stopped being so cynical and saw HORTON HEARS A WHO! It’s funny; it’s goofy; it’s surprising and loopy. It’s colorful and flashy; it’s unexpected and splashy. Wait. Splashy? Is that even a word? I needed something to rhyme with flashy and what I came up with was absurd. Sorry, I promise I won’t rhyme all the way through. Besides I’m no match for Dr. You-Know-Who. It’s just that this movie is so darn adorable when all the previous Seuss movies have been basically horrible. The spirit of the book remains completely intact but it’s modern somehow and as a matter of fact, the ideas have expanded without looking back. Now, thanks to the good folks at Blue Sky, the studio that gave us ICE AGE before this, Dr. Seuss can rest easy, his legacy revered and no longer amiss. So pack up your car, pack up your girl and your boy and bring them to see Horton, a movie the whole family can… hmm, what rhymes with “boy”? Employ? Coy? Toy? Nevermind. Bring them to see Horton, a movie the whole family can appreciate. 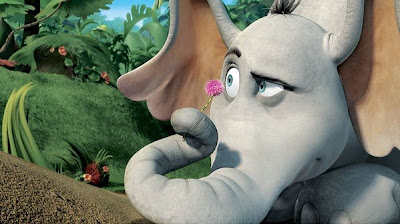 All that rhyming was mildly exhausting. Let’s move on to the intellectualizing portion of this review. When HORTON HEARS A WHO! was originally published in 1954, Dr. Seuss gave his young readers an important lesson about how any voice, no matter how small it may appear to be, can change the world. Screenwriters, Ken Dario and Cinco Paul, have developed the confidence-boosting tale into a much grander take on societal hierarchies, the power of the imagination and the possibility that we are not alone in this universe. The very big elephant, Horton (voiced in a lovably whimsical fashion of fancy by Jim Carrey), randomly finds the tiniest world in the most unexpected of places, a spec of dust that has flown past him to eventually rest comfortably on a clover. It turns out that this world is known as Whoville. It plays home to hundreds if not thousands of Who’s and is run by a Who known only as The Mayor. You can only imagine The Mayor’s surprise when Horton finally makes contact with him. Now imagine that surprise voiced by the self-deprecating, neurotic genius of Steve Carrell. Together, Carell and Carey play perfectly off each other as their performances are based in the knowledge that Horton and The Mayor are not nearly as different as they initially appear. Though one is huge and one is small, they both know the meaning of responsibility and importance of helping all who need. 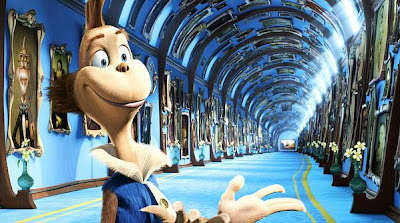 Of course, back in the Jungle of Nool that Horton calls home, no one believes his story about the people on the spec, so he must go it alone. This would be fine if it weren’t for one kangaroo (Carol Burnett), the self-proclaimed ruler of this particular jungle. Horton’s flagrant use of his imagination could inspire others and before you know it, all you got is anarchy. And so the door is opened to one of many lessons that give this fable a great richness. While children are not often discouraged to use their imaginations, here they are encouraged to support what they believe to be true inside of their hearts. In doing so, they should even challenge the status quo. Combine that with Horton’s perseverance, dedication and loyalty to his cause as well as The Mayor’s ability to rally his people together by overcoming his insecurity to become a great leader and you’ve got a family film focused on promoting fine values instead of promotional products for a refreshing change. The best part is that the lessons never take away from the fun! 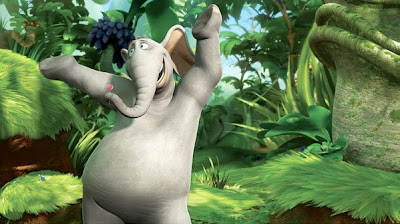 I know I wouldn’t have an easy time if a giant elephant I couldn’t see informed me that my whole universe was nothing more than a spec of dust. This is why I’m not in charge of the planet, I suppose. Although slightly less jarring, I was also thrown and most certainly impressed by the existential depth of HORTON HEARS A WHO! Who knew that an animated family flick could challenge the young minds of children the world over to think for second about the fragility and preciousness of life itself while cracking them up non-stop and without freaking them out? Horton knew; that’s who!