A few short years ago, a little musical called CHICAGO came along and set the new standard for the modern movie musical. Picking up where CABARET left off fifteen or so years earlier, CHICAGO featured quick-paced editing that compartmentalized and sexualized many a shake and just as many a gyration. Its polished glitz and glamour announced the second coming of a genre that had been struggling for years. Long gone were the days of showcasing talent, leaving composition and aesthetic to bring up the rear. From now on, talent would be constructed to work with the visuals, allowing the musical genre to appeal to a generation that can’t hold its focus longer than the time it takes to execute a four-step combination. The bar had been raised and no film has come close to CHICAGO’s caliber since, until now. Following 1960’s girl group, The Dreams, from their humble beginnings to their ultimate dissolution, DREAMGIRLS brings the musical back to the multiplex with a brand new R&B groove to back it up. Director Bill Condon hopes DREAMGIRLS will follow in CHICAGO’s successful footwork all the way to solid box-office gold and with it, he throws his hat into the Oscar race one more time (following moderately successful bids with GODS AND MONSTERS and KINSEY). What all this repackaging suggests though is that a musical is a naturally difficult sell and though DREAMGIRLS had me bopping along, rootin’ for the girls and crying out loud, it never let me forget how much it was trying to get me to like it.

Condon paints a colorful scene, rich with deep blues and golds but all his aesthetic work is overshadowed by the brazen performances of his exuberant cast. Much has been said already but everything you’ve heard is actually true. As James Early, a womanizing, coke-snorting master of funk, Eddie Murphy is sneaky and sleazy and enjoying every minute of it. His descent from fame weathers his face but his spark always manages to find its way through the funk that finds itself watered down through the years. In many ways, Murphy’s career mirrors Early’s so the applause echoes both on and off screen. With Murphy showing new life later in his career, Beyonce Knowles shows a promise I had not expected so early in hers, if at all. Months of acting classes were a great investment for Knowles. As Deena Jones, Knowles transitions from a naïve girl hoping to succeed into a grown woman at the forefront of a groundbreaking female trio struggling to take back some control over her life, which has been directed entirely by the recording industry. It might not sound like a stretch for Knowles given her experience with Destiny’s Child but her performance as Jones shows both vulnerability and desire. Perhaps her most impressive feat is scaling back her trademark vocals to play someone who supposedly has no colour in her voice. And then there is Jennifer Hudson, this year’s breakout star. Your eye is instantly drawn to her and you wait for her to show you what she’s got. When she does, you’ll see why everyone is talking. Hudson’s voice is so powerful and exudes so much character and emotion that it brought me to tears more than once. Hudson’s Effie White gets all the best songs and the best trajectory as well but if Hudson didn’t own every aspect of this character’s fragile ego as it crumbles and falls hard, no one would care about this movie. That only leaves Jamie Foxx as Dreams manager, Curtis Taylor JR. You haven’t heard much about Foxx but that’s probably because he underplays the role so much that he ends up leaving no mark at all. 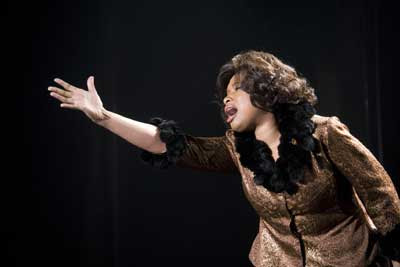 The musical is not always simply song and dance; the musical can also be meaningful. DREAMGIRLS has plenty to say and it says it directly and without shame. The bulk of its malice is pointed straight at the music industry. The first point of its one-two punch assault is in regards to the treatment of artists in the industry. Deena replaces Effie as lead singer of The Dreams because there is more chance for The Dreams to crossover with a smoother, more accessible (read, more white, but more on that later) sound and the group gets no say. One artist will rerecord another’s song and usurp all of their radio play if the label executives say so. The girls eventually lose all say over what they want to do with their own lives for the sake of their careers. In Deena’s case, this is even more abusive as her manager, Taylor, is also her husband. The second punch attacks the industry for its whitening of soul music. Often, the songs that were being rerecorded were being done so by white recording artists with more popular appeal. This is what made The Dreams so important. They were able to crossover from the R&B stations to the pop stations. While the industry was exploiting their artists and exploiting an entire race, these same black artists managed to make their own inroads towards fighting racism by appealing to white listeners who were forced to face images they were not willing to before. That’s the healing property of music, I suppose.

DREAMGIRLS is not simply a monumental musical but it is a mammoth film. It is grand in scope and large in life. Though it stumbles at times, its soul is infectious and its satisfaction is sweet. Mr. Condon, you needn’t have tried so hard. I would have liked you just the same.

How many sheep would you give Dreamgirls?