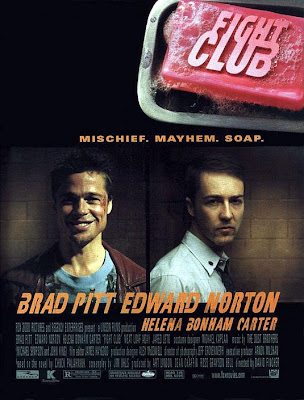 When David Fincher’s FIGHT CLUB was released in 1999, it was one of those movies that not only made you stop and take notice but had you wondering what the fuck had just happened.  Even though the century was about to turn, people didn’t know what to make of it at first.  How could they really?  Here you have this violent, aggressive piece of filmmaking that is hellbent on literally blowing up most of the institutions that modern society has grown entirely complacent to.  More importantly, all of this unrest stems not from a growing revolt amongst the masses but rather the increasingly debilitating delusions of just one man’s mind. 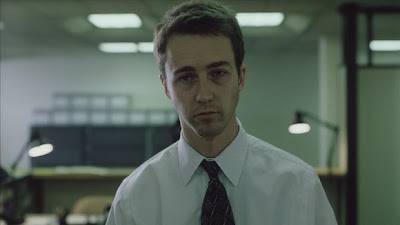 “This is your life and it is ending one minute at a time.”

The man in question is never even named.  He is simply the Narrator and he is played by the seamlessly talented Edward Norton.  Norton is the perfect choice for our hero.  His earnest face and effortless charm make him very easy to like and to relate to.  Our Narrator, who is not coincidentally reminiscent of Malcolm McDowell’s narrator in A CLOCKWORK ORANGE, starts out just like us.  He has put in countless hours at a thankless job to afford his ideally located condo and to amass the multitude of perfectly suited furniture pieces to fill that space.  He has done everything according to the great design but yet he is in a constant state of unrest.  He can’t even sleep unless he has the chance to shed all of his pain in the arms of people facing their own mortality at nightly support groups for a variety of cancer patients.  He is an exacerbated version of who a great majority of us actually are.  And thanks to Norton’s uncanny ability to draw in his audience, our dormant anger grows with his. 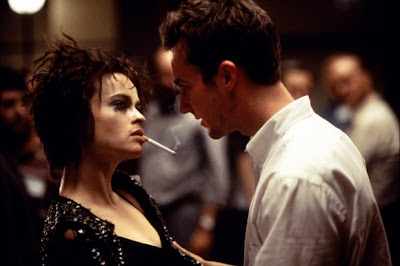 “This chick, Marla Singer, did not have testicular cancer.”

Of course, the Narrator does not have testicular cancer himself but the fact that he actually has testicles at least suggests that he could.  Marla (Helena Bonham Carter) is something of a monster.  She too does not step in time with the rest of the world – chain smoke getting caught in her wildly untamed hair as she walks in and out of laundromats stealing people’s clothing before walking directly into traffic without skipping a beat.  Marla is what sends the Narrator over the edge.  Her presence disturbs him but he cannot figure out how.  He just knows that he can’t sleep again now that Marla has made herself known.  It might have something to do with his addiction to cancer support groups.  He appreciates the sincerity of humanity when death is looming and Marla essentially wants to die.  Her death is close, or so she would like it to be, but, unlike her cancer patient friends, her death is one of her own choosing.  Where is the sincerity in that?  To be fair, I would probably lose a wink or two over that conundrum too. 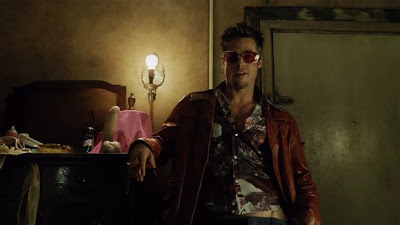 “I know this because Tyler knows this.”

The pressure of life’s trappings starts to hit our Narrator a little too hard at this point and what was waiting patiently to emerge this entire time finally does.  Fincher has been giving us subtle hints; they’re blink-and-you’ll-miss-them moments but Tyler Durden, played by Brad Pitt in his prime, has appeared in frame a few times before this for split seconds at a time.  We don’t know it then, unless we’re super geniuses or have read the Chuck Palahniuk novel, but Tyler is a complete fabrication of the Narrator’s mind.  The impact of the story rests on the audience not knowing this bit of information until later because they need to believe the bloody reality of these two men beating each other rotten in the parking lot of some dive bar.  They need to believe this because it needs to inspire legions of other men to do the exact same thing.  These men and their nightly brawls are FIGHT CLUB. 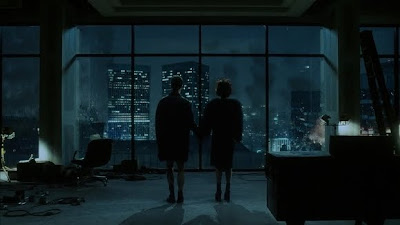 I am not a fighter but I, like the Narrator, beat the living crap out of myself from time to time.  The difference, or at least the one I am choosing to focus on right now, between the Narrator and myself is that I beat myself up under my breath when I don’t think anyone is looking.  He beats himself senseless and he does it right there for everyone to see.  And while he may be beating himself up, he is still fighting back for the first time in his seemingly insignificant single-serving life.  Aside from sincerity, there is something else the Narrator took from his life moonlighting on the support group circuit.  The imminent promise of death is a pretty good reminder for most that they’re still alive.  Pain, the intense kind that leaves scars and ringing in your ears while it drips your blood to the floor, has a similar effect.  This is especially true for those of us who don’t even realize we still haven’t slept in years.