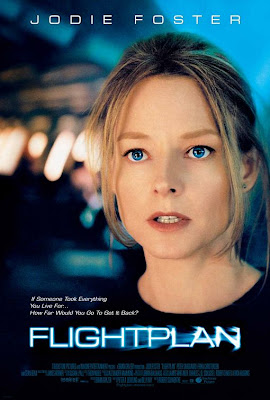 There is a moment about half way through FLIGHTPLAN where I began to wonder how the mystery that drives this film was going to maintain my interest. There are only so many times an airplane captain can debate with a passenger as to whether or not a certain other passenger was ever in fact on board this particular flight. Of course, Jodie Foster plays the passenger he is arguing with here and the missing passenger is her daughter. Understandably, she isn’t backing down. Consequently, logic takes on instinct and filmmaker Robert Schwentke allows us to debate her sanity on our own. Combine this with the camera moving frantically, yet stylishly, through the maze of this massive aircraft, peeking in and out of every possible hiding place and you’ve got a movie soaring miles above whatever in-flight movie the passengers of FLIGHTPLAN were subjected to. (For their sake, I hope it wasn’t the infinitely less superior RED EYE.)

Throughout the search, a range of complexity washes over Foster’s face, from fragility and fear to determination and will. In the confines of her claustrophobic world up above the clouds, she never gives up hope amidst a group of people who care more about the disturbance to their sleep than the fate of a small child. It’s this hope that dispelled my concerns and kept me involved until we landed safely at the closing credits.