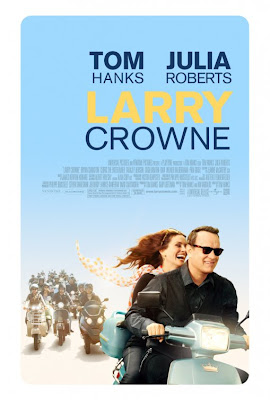 Dr. Matsutani: They call them smart phones but only dummies use them in my class.

It’s nothing personal against Tom Hanks – I like the guy – but he would not be my first choice to write, direct and star in a feature about the difficulties one faces when one loses a thankless job in the middle of one’s life. Larry Crowne is uneducated, which employer, U-Mart, uses as an excuse to let the long time worker go. Larry decides to go back to college so this never happens again and there he gets a makeover, joins a scooter gang and falls in something that I think is supposed to resemble love with his teacher, Mercedes (Julia Roberts). By keeping the tone light and avoiding what should be the harsh reality of the situation, Hanks, the former everyman, only shows how far removed from the rest of us he now is. 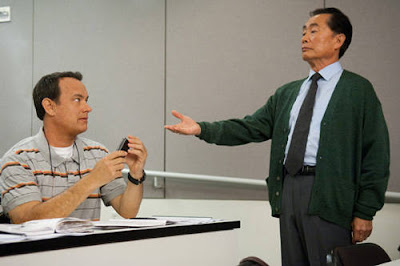 To be fair, even though this is clearly a Hanks passion project, he should not bear the full brunt of the blame for how insipid LARRY CROWNE is. Some of that responsibility falls distinctly on the shoulders of his co-writer, and good friend, Nia Vardalos. You may remember Vardalos as the author and star of the biggest independent film of all time, MY BIG FAT GREEK WEDDING. She played up stereotypes and clichés as much as possible back then and her lack of connection with what is real has not improved since. To call the “revelations” made in LARRY CROWNE simple would be itself an oversimplification. For instance, did you know that social networking is apparently responsible for ruining the attention spans of young people? Or more importantly, were you aware that student apathy in class has spread and apparently has now affected the teaching community as well? My personal favorite lesson learned in LARRY CROWNE is how the stuff we own eventually owns us. Clearly, I’m a much better person for having seen this. 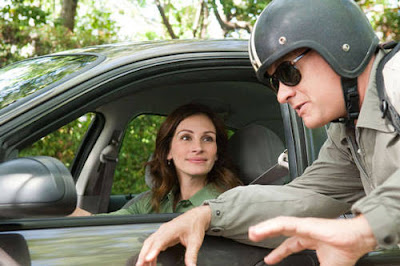 This is a film about education but yet I learned absolutely nothing. This is a film about starting over and yet nothing about LARRY CROWNE felt remotely new. Perhaps when you’re as famous as Hanks, and backed by the equally famous Roberts no less, nobody dares tell you that what you’re making isn’t working. The tone is not serious, even though at times it certainly should be, but it is never actually funny either. It exists in some sort of film purgatory and forces us to suffer there with it. Maybe Hanks himself should consider going back to school; he clearly could stand to learn a thing or two about making movies and something I like to call real life.