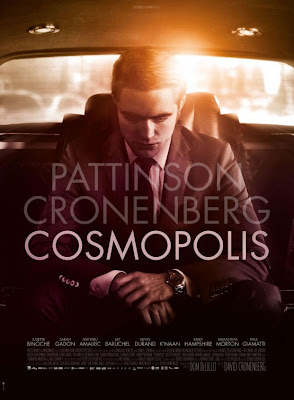 THE COMEDY OF COSMOPOLIS
An interview with COSMOPOLIS writer/director, David Cronenberg and star, Robert Pattinson

When a director is as prolific as David Cronenberg is as of late, it is not uncommon to end up interviewing them more than once in the same year for different projects. I had spoken with Cronenberg earlier this year when A DANGEROUS METHOD had its Canadian release and with this week’s release of COSMOPOLIS, I found myself face to face with the icon for the second time in six months. Somehow I had completely forgotten that the man is way more amusing than I would ever expect him to be.

“I used a little Apple program called iDirector,” Cronenberg announces of his COSMOPOLIS process. “A little green light goes on if its ok and a red light if you need another take.” See what I mean? The man is hilarious.

There is nothing funny about the premise of COSMOPOLIS though. Based on the 2003 Don DeLillo novel of the same name, Cronenberg’s 20th feature film recounts protagonist, Eric Packer’s day long quest to get across Manhattan for a haircut from his regular barber. It sounds silly on the surface but it is set against the backdrop of the collapse of capitalism, making the film both timely and incredibly tense.

As complex as the story is though, Cronenberg had very little trouble adapting the book into a screenplay. “I literally transcribed all the dialogue [from the novel] and put it into screenplay form. Then I looked at it and asked, ‘Is this a movie or not?’ And it was.” The entire process took him all of six days to accomplish. His extensive experience allows for this kind of efficiency. “Now that I’ve adapted a few things, I’ve accepted the rule of thumb that there are some things that you just can’t do in movies that you can easily do in novels, and vice versa. The things that didn’t work or that I couldn’t make work, I just left out.”

One of the things that does work in the film is its star, the infamous Robert Pattinson, whom was also on hand for the COSMOPOLIS Canadian press tour. This is the first collaboration between the two super powers and already rumoured not to be the last, with Pattinson lined up for another unconfirmed Cronenberg project to be shot in France. The secret to their success? “I was in the very obvious throes of a panic attack. I guess its part of my process where I feel like I have to go through the motions of feeling like I’m having a heart attack,” Pattinson admits, wearing his anxiety like a second skin. “David got me to stop worrying. Although, he may have just been placating me until I came around.”

Pattinson was not originally supposed to play Packer, a tycoon loathed the world over for simply being rich and good at it. The role was first given to Colin Farrell but when he dropped out due to scheduling conflicts, Cronenberg rewrote the script for a younger actor (which is more authentic to the book anyway) and immediately thought of Pattinson. The last minute casting change did not leave much time for Pattinson to prepare though.

“I was not going to come up with a completely original interpretation of DeLillo in two weeks. That’s completely ridiculous,” states Pattinson, when pressed about how he came up with the character so quickly. “There’s something about the construction in DeLillo’s writing that is so easy, you don’t need to add anything to it. That’s the direction David encouraged me in.”

Cronenberg didn’t just encourage this loyalty to the word on the page, he insisted on it. “In general, I don’t want the actors to be screenwriters. They’re not designed for that,” Cronenberg quips, without the least bit of insult to actors at all. “If everybody is improvising and you have actors who are used to doing that with each other, that’s a whole other thing. Basically, I want them to stick to the script but within that, there are tons of things an actor can bring to it.”

Pattinson kicking back and letting Cronenberg steal the show at the Toronto press conference.

The remaining cast of COSMOPOLIS is made up of many familiar Canadian faces, including Jay Baruchel, Emily Hampshire, Kevin Durand and Sarah Gadon. The film was shot in and around Toronto, from Yonge and Bloor to Union Station to Geary Avenue in the wee hours of the morning. Once again, Toronto is made to look like New York City, something that COSMOPOLIS has been criticized for not doing as well as it could have. “Somebody had said to me that there aren’t even any New York landmarks in the film but there aren’t any in the book either. In fact, a lot of the places, actually almost all of them that are mentioned in the book, are gone,” Cronenberg says, in response to this criticism. “So even if we were shooting in New York, it would have looked like it did, I have to say.”

As the capitalism capitol of the civilized world, the story had to be set in Manhattan. And with as much global unrest as there is these days, COSMOPOLIS couldn’t hit at a more opportune time. Be warned though occupiers, while the film depicts the demise of the financial world as we know it, it doesn’t do it how you would think. “There are no anti-capitalist characters in the movie, even though you might think it is an anti-capitalist creed on some level,” Cronenberg declares. “It’s really more pro-capitalist with people just wishing they were in on the action.”

While typical fare for Cronenberg, COSMOPOLIS is not what your average Twihard (that is what they call themselves, right?) would ordinarily see. Pattinson still thinks they will like it though. “I like this script the same way I liked the TWILIGHT scripts. I’m not a post-modernist scholar,” Pattinson begins to explain but at this point, Cronenberg cuts him off.

“Your agent said you were,” he says, dryly and without missing a beat. Suddenly everyone is laughing again and the interview is over. With chemistry like that, who knows? Maybe Pattinson will be the new Mortensen.