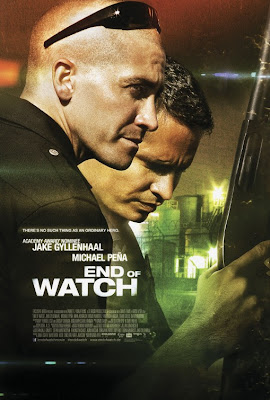 HE IS NOT HIS HAIR.
An interview with Jake Gyllenhaal, for END OF WATCH.

“And what was that other question you asked?” I heard a very relaxed and a very handsome, Jake Gyllenhaal, say to me early one morning during the 2012 Toronto International Film Festival. A very tired and a very frazzled me, sheepishly replied, “Uh, I was wondering if it was difficult for you to grow your hair back out after the shoot.” He smiles directly at me with those big, blue eyes and says, “Yeah, I just had to make you repeat that one.” Wow. Jake Gyllenhaal had just messed with me. Heaven.

To be fair, I preceded that hair question with a serious one about whether his time on END OF WATCH, his new badass cop film co-starring Michael Pena and written and directer by David Ayer (TRAINING DAY), was any more difficult to shake off at the end of each day.

“I’m just happy being in Toronto promoting this movie and having made this movie,” Gyllenhaal continues. “To me, honestly, this movie was not about vanity. I totally respect the intention of the question but it’s very hard for me to talk about hair when I feel like the police officers I worked with have much more important issues to think about. I feel like I’d be doing them a disservice.”

The great thing about Gyllenhaal, or what I can assess of him from the scant fifteen minutes we shared a room together, is that his earnestness is as plain as the nose on his face. Well, there’s nothing really plain about his nose but you get where I’m going with this. And it’s not like he didn’t give me a wealth of great material for my previous question.

“The process of making the movie, 22 day shoot in all, was probably the least intense part of the whole journey,” Gyllenhaal explains. He and on-screen partner, Pena, spent two to three nights a week for five months riding along with Los Angeles Police Department officers in preparation for the part, a lengthy prep period by any Hollywood standard. “When I would be driving home at 5:00 in the morning, having worked in South Central, it would take me a couple of hours just to get to sleep. I would also think, it’s not my job but i’m observing it and i’m continuously observing it. And yet you’re not really involved so there is this strange middle ground where you exist. This can make you weirdly feel even more alone.”

Aside from exposing Gyllenhaal, an Oscar nominee and Los Angeles native, to the harsh reality of the unfamiliar streets in South Central, the purpose of the ride alongs was to bond him to Pena. Ayer’s script called for Gyllenhaal and Pena to be so much more than mere partners; the script specifically refers to them as brothers.

“You have to have that brotherhood in order for the movie to work,” Pena explains, when asked about his chemistry with Gyllenhaal. “We didn’t get along like brothers instantaneously but after all that time together, I knew that Jake had my back.”

In Gyllenhaal’s mind, if they didn’t get this camaraderie just right, then END OF WATCH would not have worked at all. “To me, the movie is about a relationship, the movie is about a friendship, the movie or the reason I wanted to do the movie is not because it was about cops,” Gyllenhaal exclaims. For him, the buddy cop genre is entirely irrelevant in this case. “I think you can take these two guys out of uniform and put them in another context and it would still be an interesting movie to watch.”

Of course, if it were an entirely different movie, like if Gyllenhaal and Pena were playing say, I don’t know, extreme cupcake partners, or something just as equally ridiculous, I’m not sure END OF WATCH would have had the same impact on his life.

“I had never approached a film or a character in this way. It was really informative to me as an actor and really as a person,” a very appreciated and seemingly genuine Gyllenhaal reveals. “The relationships we made along those five months, the experiences we had together, they changed my life as a person. The movie for me almost feels like an after thought. It was a very special process for me. Michael and I will always share that and always be close because of that.”

Gyllenhaal is a self-professed actor’s actor, having worked opposite some of the best of them, from Heath Ledger (BROKEBACK MOUNTAIN) to Natalie Portman (BROTHERS). “I love actors!” I have no issue presuming an exclamation point there; he was that enthusiastic when he said. “I love watching them work. I love seeing somebody just kill it. It is the biggest joy that I have weirdly as an actor, that I get to be inside that process.”

At just 31 years of age, and with upcoming projects as varied as Oscar-nominee, Denis Villeneuve’s follow-up to INCENDIES, ENEMY, in which he plays two polar opposite characters, to appearing an original off-Broadway play called, “If There Is I Haven’t Found It Yet”, Gyllenhaal shows no signs of slowing or easing into simpler roles. This not only bodes well for his future but it means there will be plenty more opportunities for him to mess with me again. Either way, as long as he continues, Gyllenhaal will be happy.

“To me, playing a character and making relationships with people, really learning about their stories, is what I love to do. And hopefully that’s what will be it for the rest of my life.”