This is it, folks. It’s the one you’ve all been waiting for. It is a true return to form, style and relevance. It has been all too easy, almost expected, to laud Martin Scorcese pictures with praise in recent years. The man has talent and has crafted some of cinema’s landmark films, from TAXI DRIVER to GOODFELLAS. The industry was naming his last picture, THE AVIATOR, the film of the year. That seemed exaggerated, an all too safe a thing to say. To name the same of his previous epic mess, GANGS OF NEW YORK, was even more absurd. There seemed to be regret for not crowning him king earlier for more deserving efforts. The later pity praise felt apologetic instead of congratulatory. The films themselves felt manufactured for mass appeal, devoid of personal involvement and often a courting of industry acceptance. This time is different. This time Scorcese feels concise and calculated, like a man with a purpose, focus. This time Scorcese has left his hopes for accolades behind him and engineered his own cinematic rebirth. This time Scorcese says goodbye to his past and embraces THE DEPARTED.

Borrowing its intricately woven story from the 2002 Japanese film, INFERNAL AFFAIRS, THE DEPARTED stars Leonardo Dicaprio and Matt Damon as moles infiltrating both sides of a war between the law and organized crime. Dicaprio plays Billy Costigan, a Boston State Policeman with a family history entrenched in crime. As he is trying to make a new name for his family, he is thrown back into the world he worked so hard to escape. Costigan will go undercover and make his way into the confidence of Boston’s biggest crime boss, Frank Costello (Jack Nicholson). Costello, meanwhile, has his own man on the inside of the Boston State Police, Colin Sullivan (Damon). Sullivan was brought under Costello’s wing when he was just a boy who was doing well in school. Both Costigan and Sullivan sought power. Costigan’s power lied in authority and changing his apparent destiny through hard work. Sullivan was seduced by a different kind of power. He still had to work hard but he had the muscle to back him up when he needed it. Dicaprio’s and Damon’s solid performances heighten the tension and make for insightful character studies. As Costigan, Dicaprio is anxious and unstable. Pretending to be a brute with nothing to live for and no reason to do bad other than it being his genetic makeup goes against everything he’s ever struggled with. His eyes flare up and his whole body flinches every time he is around intense violence; he never seems to get used to it. As Sullivan, Damon is a confident, cocky liar who gets off on how many people he’s fooling and just how well he is fooling them, from his colleagues on the force (a supporting cast consisting of Martin Sheen, Mark Wahlberg and Alec Baldwin) to his psychiatrist girlfriend, Madolyn (the relatively unknown and engaging Vera Farmiga). When it becomes apparent that both teams have been permeated, the game to catch the rat becomes tenser the closer each gets to figuring the other out. Amidst growing suspicion and fear of getting caught, THE DEPARTED becomes unpredictable and entrancing. 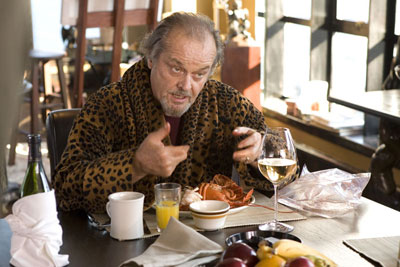 The surprisingly layered performance of Nicholson as Costello is one of THE DEPARTED’s best features. I expected that Nicholson could pull off a mob boss in his sleep but he brings experience and the effects of time to the role. Like one would expect, one doesn’t become a mob boss from being a nice guy. Costello is evil right through. He finds amusement in how a body slumps over to the side instead of forward when he blows a bullet through the back of her head. He has grown accustomed to getting everything he wants, to having no one stand in his way. To some extent though, he has grown bored and complacent with this lifestyle. He knows of nothing else but knows that alternatives exist. He seems to live his life appreciative of his position but with regret, or at least an awareness, that he did not make other decisions. When he speaks of Costigan’s father as a guy who could have been a big boss if he wanted to but didn’t, the acknowledgment alone highlights the power of choice. When he tells Costigan that he should go back to school, it highlights his own choices.

Something Costello is fond of saying is that “No one gives it to you; you have to take it.” It is a mantra for Costello and it seems like one for Scorcese as well regarding his approach to this film. Scorcese’s command of THE DEPARTED can be felt in the composition of each shot, in the energy of the omnipresent soundtrack and the grasp of the subject matter. Like Costello, Scorcese has been coasting in recent years; the results have been passable, at times solid, but always tired. THE DEPARTED announces Scorcese’s return to making affirmative choices again, and the right one’s at that.

How many sheep would you give The Departed?