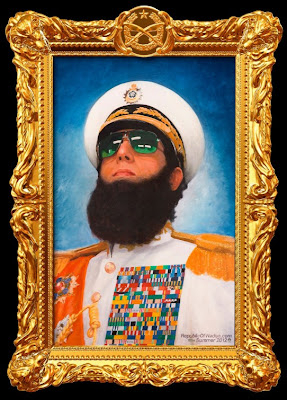 When a movie opens with a proclamation that is dedicated to the honour of the now deceased, former dictator of North Korea, Kim Jong Il, you know that what is about to follow is certainly going to be some of the most outrageous footage you’ve ever seen. THE DICTATOR, the latest Sasha Baron Cohen comedy vehicle, delivers this without flinching and the laughs, assuming you’re willing to go to all of these horrendously offensive and borderline racist places, follow in side splitting droves. I’m not sure what this says about me exactly but I had no problems going there and I was having such a good time, I didn’t want to leave.

Hailing from the fictional Republic of Wadiya, a Middle Eastern country where it is sunny year round according to their weather forecast, the Supreme Leader, Admiral General Aladeen (Baron Cohen), rules without any question or concern for how he treat his people. As he has people executed left and right, he is also plotting to trick the United Nations into thinking his nuclear capacity will be used to better the world instead of destroying it. Upon visiting the UN in New York City to continue his long con, he is replaced by a lookalike Aladeen and an attempt his made on his life, by the order of his right hand man (Ben Kingsley). While he tries to get back to his position of power, so that he can stop Wadiya from (gasp) becoming a democracy, he falls unexpectedly for Zoe (Anna Faris), who is of course the nicest person in the history of humanity. 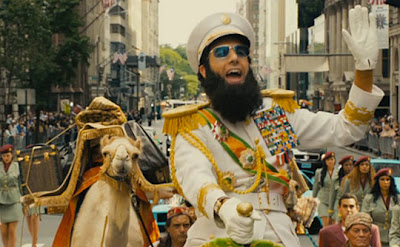 Still under the direction of BORAT helmer, Larry Charles, THE DICTATOR marks Baron Cohen’s transition from mockumentary to scripted comedy. It’s a fairly smooth one and most certainly a marked improvement after his last similar outing, BRUNO. While the laugher and shock factor remain in tact though, the bite is a little less severe. This is because THE DICTATOR does not capture the visceral immediacy that BORAT did when it exposed people’s dark and dirty souls without them realizing. Instead, the underbelly of humanity is brought to light here in an oversimplified and often cliched manner, preying on the audience’s more inherently ignorant points of view on Middle Eastern culture, including my own apparently. In the end, THE DICTATOR provides the big laughs but it does so so easily that it eliminates any need for real thought on the subject, making it an excellent comedy but only a so-so satire.