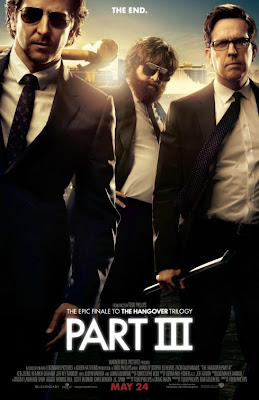 Todd Phillips debuted THE HANGOVER franchise four years ago and ignited a fiery craze among buddy comedy fanatics everywhere. Unfortunately for Philips, everything he’s given us since that initial introduction to those masters of destruction, the Wolf Pack, has been on par with actually feeling hung over. THE HANGOVER had some unexpected charm to it, fully embracing the notion that whatever happens in Vegas, absolutely has to stay in Vegas. After the horrible THE HANGOVER PART II took the action to Thailand, the whole gang has returned to where it all began for THE HANGOVER PART III, Las Vegas, Nevada, and for the better. Ending a trilogy requires a big bang, especially when the middle film was THE HANGOVER PART II. In the end, THE HANGOVER PART III lacks laughs, crosses lines that shouldn’t be crossed, and is only slightly better than the last mess. That’s a kind of bang, right?

If you’ve seen anything of the first two films, then you know that Zach Galifianakis’s Alan is high maintenance, significantly inept, and always getting himself, and his friends, into serious trouble. Would it really be a HANGOVER movie if the entirety of the problem didn’t stem from him again? After Alan is confronted and refuses to change his ways, the only thing that his brother-in-law, Doug (Justin Bartha) sees fit to do with him is send him into a rehabilitation centre. Unfortunately, due to Alan’s resistance, fellow Wolf Packers, Stu (Ed Helms) and Phil (Bradley Cooper) must accompany him or he won’t go. Cue expected mayhem. Remember when Alan bought roofies and drugged his friends in the first HANGOVER? Well, that’s come back to bite them now. And so has the infamous, Mr. Chow (Ken Jeong). If the guys have learned anything at all over the years, it’s that Chow shouldn’t be trusted. The Wolf Pack never learns though so someone might finally want to wake up if they ever want to bring all the chaos to a close.

Phillips, who has penned and directed the entire trilogy, wanted to leave fans with something they would remember fondly, something they could savour after the Wolf Pack has gone away for good. THE HANGOVER PART III certainly leaves a distinct taste in your mouth, but by no means is it a good one. Think of the taste in your mouth after a night of binge drinking perhaps. Sure, there are some cheap laughs and a great line here and there, but there is also an awful lot that is just plain off putting, including an absurdly unnecessary amount of animal cruelty.  What THE HANGOVER PART III does have going for it, is that it is at least a fitting end for this uneven trilogy. The conclusion does feel natural so at least there’s that. Plain and simple though, a good comedy, like say, the original THE HANGOVER, for example, has many moments of hilarity without necessarily sacrificing character or plot. The fact is I’ve had head-splitting, vomit-filled hangovers that were funnier than THE HANGOVER PART III.

PS. If you still insist on seeing THE HANGOVER PART III, stick around after the credits. Funniest two minutes of the entire thing.

How many sheep would you give The Hangover Part III?