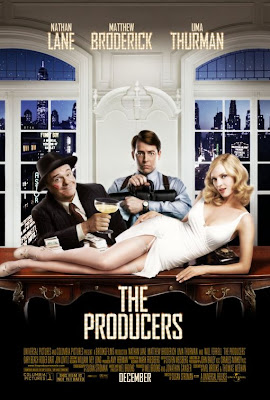 It should be noted right off the bat that I spend my life accounting with figures and such and that I have a not-so-secret desire somewhere deep in my soul. Yes, that’s right, I wanna be a producer of a big show on Broadway! Well, maybe not Broadway as they are more frequently interested in commerce more so than art (when is that “Apprentice” musical opening??). I also had the chance to catch THE PRODUCERS, the Broadway musical earlier this year, albeit not starring Nathan Lane and Matthew Broderick, as it was originally cast a few years ago. I saw it and I did not love it. There’s nothing terribly exciting about watching an actor put on a bad Nathan Lane impression (or in my case, an understudy putting on an impression of an actor putting on a bad Nathan Lane impression).

The film interpretation, directed by choreographer Susan Stroman, is very loyal to the stage production and a lot more enjoyable to watch with Broderick and Lane in the leads. Stroman gives a refreshing taste of the classical Hollywood musical, staging some musical numbers on stages themselves (revolutionary!), some on sound stage sets that recreate the streets of New York and others on the actual streets of New York. The result is a lively, energetic film with many hearty laughs at the expense of the absurdity of the theatrical world and Broadway itself. 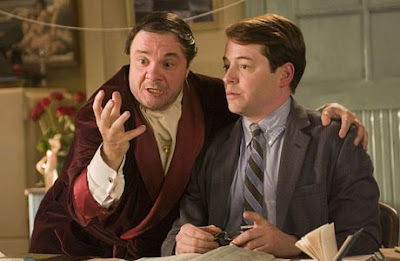 The one thing I did not see was this supposedly perfect chemistry between Broderick and Lane that helped the stage production amass a record setting number of Tony Awards. As Max Bialystock, a middle-aged Broadway producer slash scam artist, Lane is slimy, quick and crafty. He always has an answer and his timing is on cue at all times. It became obvious to me how vital Lane is to this show as Bialystock highlights his strongest traits, a smooth liar who constantly fumbles but knows how to wiggle himself out every time. This will replace his role as Albert in THE BIRDCAGE as his signature. On the other hand, I found Broderick to be annoying and difficult to watch at times. To begin with, the character of Leopold Bloom is a pathetic coward, prone to overly dramatic panic attacks if one steals the remaining scrap of his childhood blue blanky. Broderick then takes this character and overdoes every movement, every expression, almost every line. Bloom may be an awkward guy by nature but Broderick himself looks uncomfortable and unsure how to make this character work on screen. As a result, instead of going forward side by side, Lane ends up carrying Broderick along with him.

Broderick works much better opposite Uma Thurman as Ulla. Thurman has never looked more like a classical movie star and together they generate some genuine sparks during an enchanting number called “That Face”, in which the walls that prevent love from growing between an unobtainable woman and a bumbling, mumbling accountant are broken down with a dance and a kiss. Another addition to the cast, Will Ferrell, continues to enhance his character work with more depth and less Will Ferrell. As Franz Liebkind, the author of the supposedly worst play ever written, “Springtime for Hitler”, Ferrell is infallible, maintaining the caricature of a neo-Nazi musical nutjob throughout, without giving into his own self-indulgence. 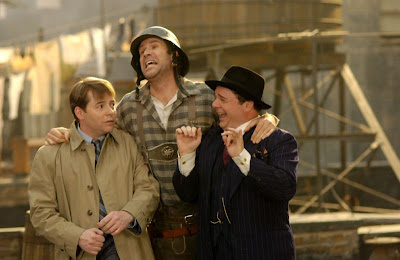 Caricature is typical Mel Brooks and THE PRODUCERS oozes caricature, from a blond bombshell who can barely speak English, to an entire parade of gay theatre folk in costumes as cliché as sailors, leather cops and Indian chiefs. My issues with Broderick aside, Brooks’ incapability of seeing characters other than one’s he could conceivably play (think white, straight, Jewish type) as characters with actual personalities is what ultimately stops THE PRODUCERS from selling. Hysterical laughter one minute, an awkwardly hushed theatre the next.