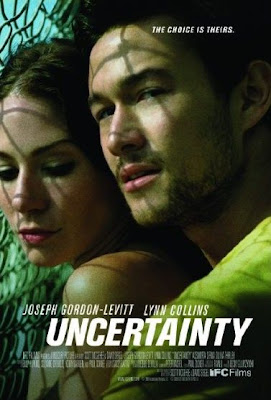 The inability to make up one’s mind about something can be infuriating.  When the choice at hand is one that will certainly alter the course of your life, that frustration can almost be debilitating.  Life will randomly throw explosives at you and there is no way for you to know where everything will land once you set those bombs off.  You do know that if you do nothing about them though, they will still go off.  If only we could split our lives into two separate entities, just for a day.  Then, maybe we could see that all roads lead us somewhere and that even though this somewhere is not where we thought we would end up, it isn’t necessarily a bad place to be.  Unfortunately, life doesn’t work that way but that doesn’t stop writer/directors, Scott McGehee and David Siegel from exploring just that in their latest collaboration, UNCERTAINTY. 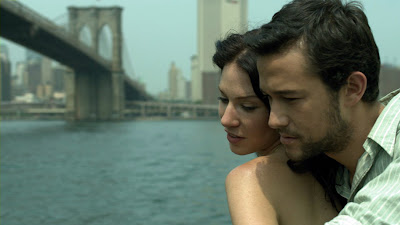 Joseph Gordon-Levitt (500 DAYS OF SUMMER) and Lynn Collins (X-MEN ORIGINS: WOLVERINE) star as Bobby and Kate, a couple with choices to make about their future.  Their journey begins on the Brooklyn Bridge and for the first five minutes, it would appear as though we are just as doomed as they are.  To set up their highly conceptual plot, McGehee and Siegel have the lovers speaking symbolism instead of words.  It is as painful coming out of their mouths as it is going into our ears.  Essentially, they are debating whether or not they can really do what they’ve been thinking about doing without actually saying what that is.  The choice is to go for it and suddenly they each sprint in opposite directions and meet up with alternate reality versions of each other on the other side.  Let the abstraction begin! 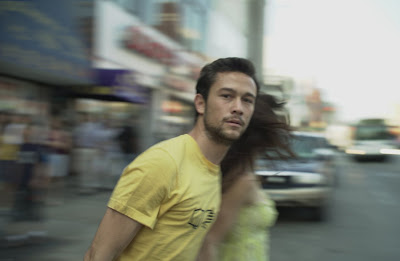 While following the initial split is jarring, the split lives themselves are actually quite engaging.  Gordon-Levitt and Collins work well together and the timely manner in which their secrets and troubles are revealed to us is properly paced, allowing us to be with them in their confusion.  Consequently, it is easy to sympathize and hope for their future.  It is also easy to get lost in the colorful and carefully shot New York City backdrop.  It all culminates back on the bridge though and sinks back into awkwardness but everything in between makes for a stimulating time, both visually and mentally.

I’m not quite certain about UNCERTAINTY, but I do know that it distracted me from my own explosions for a couple of hours.  I’m not sure if any questions were really answered or if resolution is even the point though.  And so in saying good night to Bobby and Kate, I go back to my own confusion.